Guest post by Susan L. Speaker, PhD, Historian for the Digital Manuscripts Program of the History of Medicine Division (HMD) at the NIH National Library of Medicine (NLM), and Jeffrey S. Reznick, PhD, Chief of HMD at NLM.

One important role of NLM staff is to research, curate, explain, and make available historical collection materials. In doing so, our historians, librarians, archivists, and exhibition specialists prioritize the history of underrepresented groups, stories of advocacy and change, and materials that demonstrate the relevance of history to current events. Although this Women’s History Month will soon conclude, we recognize women who have made a difference in the history of health care and medicine — as well as women who make history — year round.

NLM’s collections span ten centuries, encompass a variety of digital and physical formats, and originate from nearly every part of the globe. For many years, through a constellation of research, curation, and public programs connected to these collections, we have shared the stories of women — healers, naturalists, midwives, nurses, physicians, scientists, artists, advocates, and patients.

These individuals have included — among many others — Faye Abdellah, who became the first nurse to achieve the rank of Rear Admiral, Upper Half, a two-star rank, in the U.S. uniformed services, as well as the first nurse and woman in the 200-year history of the United States Public Health Service to hold the distinguished position of Deputy Surgeon General; Virginia Apgar, the neonatologist who developed the Apgar scoring system for evaluating newborns; and Elizabeth Blackwell, the first woman to receive a Doctor of Medicine degree from an American medical school, overcoming many obstacles and establishing a foundation for American women physicians. We have also featured Selma and Lois DeBakey, icons of both medical literature preservation and communications; Bernadine Healy, the first female Director of the NIH, and Inez Holmes, World War II veteran and nurse who trained at the Piedmont Tuberculosis Sanatorium for the treatment of African American patients in Virginia.

Among the others we have recognized through our curation are geneticists Barbara McClintock and Maxine Singer; chemist and crystallographer Rosalind Franklin, whose X-ray diffraction images of DNA revealed its helical structure; embryologist, cell physiologist, and public health administrator Florence Sabin; and philanthropist Mary Lasker, whose public health advocacy helped to spur a vast expansion of NIH.

Through our curation we have also brought forward historical knowledge about many groups of women and their wide-ranging experiences, expertise, interests, and roles in medicine and science. These groups have included women of the Frontier Nursing Service, women who composed unique, handwritten “receipt” books in which they noted, tested, and revised formulas for household remedies for common medical problems, as well as women physicians and nurses in the armed services of World War I and World War II. We have also told important stories about women who changed the face of medicine through their leadership and expertise, and those who confronted domestic violence and improved women’s lives.

We have also shown how women’s historical presence is sometimes obscured in larger accounts and must be made visible through careful reading and piecing together textual and visual evidence. Such curation enables us to reveal the stories of women who worked in labs at NIH, like Hope Hopps, as well as lab workers who worked in the California State Hygiene Lab in Berkeley just before World War I, and medical students who gathered tuberculosis patient data at Johns Hopkins University at the turn of the last century. NLM is also steward of the papers of early twentieth-century women bacteriologists whose important work is not widely known, including Alice Evans, Sarah Stewart, and Margaret Pittman. We collect and make these papers available to interested investigators, preserving their stories for future research.

Along with our many efforts focused on highlighting the experiences and voices of women in our collections, we also amplify the voices of today’s women historians, especially those from underrepresented backgrounds, who have studied our collections to advance their research. This month, we welcomed to our NLM History Talk series Patricia Palma, PhD, Assistant Professor in the Department of Historical and Geographic Sciences at the University of Tarapacá, Arica, Chile. Dr. Palma spoke about her research on homeopathic therapies in Peru during the late-nineteenth and early twentieth centuries, drawing on unique materials held by our institution. Last month, we welcomed Deirdre Cooper Owens, PhD, the Charles and Linda Wilson Professor in the History of Medicine & Director of the Humanities in Medicine Program, University of Nebraska-Lincoln. Dr. Cooper Owens spoke about women whose stories of enslavement are part of the history of gynecology in the United States. In April, we will welcome Rana A. Hogarth, PhD, Associate Professor of History at the University of Illinois, Urbana-Champaign, who will speak on how people of African descent became targets of eugenic study during the early decades of the twentieth century.

Notably, many of these curatorial efforts are themselves brought you by the women of NLM —archivists, librarians, historians, and exhibition and technical specialists. So, as we work year round to recognize women in history and connect with women making history, we also recognize each and every one of our colleagues who are themselves making history through their public service here in the world’s largest biomedical library! 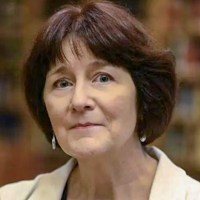 Dr. Speaker has been Historian for the Digital Manuscripts Program since 2002. She conducts research, selects documents, and writes in-depth contextual narratives for the Profiles in Science project, and she carries out other historical work for HMD including articles, blog posts, presentations, and oral histories on a variety of topics. She is also the historical consultant for the NLM Web Collecting and Archiving Working Group. Dr. Speaker is a graduate of the University of Pennsylvania.

As Chief of the NLM HMD, Dr. Reznick leads all aspects of the division in cooperation with his colleagues and has over two decades of leadership experience in federal, national-nonprofit, and academic spaces. As a cultural historian, he also maintains a diverse, interdisciplinary, and highly collaborative historical research portfolio supported by the library and based on its diverse collections and associated programs. Dr. Reznick is author of three books and numerous book chapters and journal articles, including, as co-author with his colleague Kenneth M. Koyle of History matters: in the past, present & future of the NLM, published by the Journal of the Medical Library Association in 2021.

2 thoughts on “Recognizing Women in History All Year Round”