Artificial intelligence (AI) has become one of the hottest fields of the 21st century. But AI isn’t a new concept. It’s older than I am!

AI—or, more specifically, machine learning-based automated intelligent decision support—is making inroads in applications that we could only dream about just a few decades ago, such as automated check recognition, movie and video recommendations, and self-driving vehicles.

And in the near term, the role of AI may be as computer-based applications that use data-derived knowledge to support or advance human activities that are tedious, repetitive, and relatively deterministic, especially where expert resources are lacking. In other words, AI may not only help solve budget issues, it may also help reduce boredom.

The idea of an artificial brain was initially promoted by a handful of scientists from different fields, resulting in the founding of AI research as an academic discipline in 1956. After some initial discoveries, and a clearer understanding of the challenges involved, the field lost steam during the last decades of the 20th century. However, advances continued in the form of various statistical pattern recognition and machine learning techniques.

Then, in 2012, a breakthrough in deep learning was published. The image-classification error rate had been cut in half for the ImageNet dataset in the ImageNet Large Scale Visual Recognition Challenge (ILSVRC). By 2017 the best AI algorithms were detecting and recognizing objects in photographic images at an impressive accuracy rate of more than 97%, surpassing human performance.

Here at NLM, we’ve been working on image informatics research and advancing computational science techniques and information retrieval using traditional machine-learning methods for many years, even before the advent of deep learning.

Some of AI’s most exciting applications are happening in underserved and under-resourced regions, and imaging-based AI can help fill the gaps where medical expertise may be limited. My fellow NLM scientists and I have applied and contributed to advancing AI techniques to predict tuberculosis and other pulmonary diseases in digital chest X-ray images, screen for malaria parasites in microscopic blood smear images, and detect age-related eye diseases. A recent landmark paper showed that an AI algorithm was superior to human experts in identifying cervical precancer in women.

These findings are consistent with other AI advances in medical imaging reported in the scientific literature, including reading CT scans for lung-cancer screening, detecting brain tumors, screening for diabetic retinopathy, digital pathology applications for precision oncology, and performing radiologist-level pneumonia detection on chest X-rays. While many of these exemplify amazing advances in medical imaging AI, some are built on or have humble beginnings in outcomes from ImageNet’s object localization and recognition challenge.

Our research interests also include intelligent ensembles of deep learning networks where each type of network learns something different from the data, and the learned knowledge is then transferred and fused into other sets. This effort is particularly important for rare diseases, where the number of samples in the population tends to be smaller. Unlike humans, it’s a challenge for AI to learn key patterns from a few samples. But we’re trying to develop this capacity.

Breakthroughs in modern AI techniques in medical imaging are empowering, but these are still early days. Yet achieving AI’s potential as smart assistive technologies appears to be more imminent than replacing human expertise with AI.

I continue to dream of a future in which AI makes our lives healthier and our health care delivery more effective. 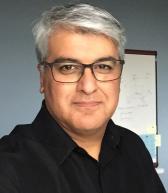 Dr. Antani is a versatile lead researcher advancing the role of computational sciences and automated decision-making in biomedical research, education, and clinical care. His research interests include topics in medical imaging and informatics, machine learning, data science, artificial intelligence, and global health. His primary areas of research and development include cervical cancer, HIV/TB, and visual information retrieval, among others.